Warning: count(): Parameter must be an array or an object that implements Countable in /home/martyhom/public_html/wp-content/plugins/inwave-common/inc/metaboxes/init.php on line 746
 The Mysteries of Rome: the Alchemy Gate of Villa Palombara
Contact us directly via emai at info@martyhomeinrome.com

The Mysteries of Rome: the Alchemy Gate of Villa Palombara 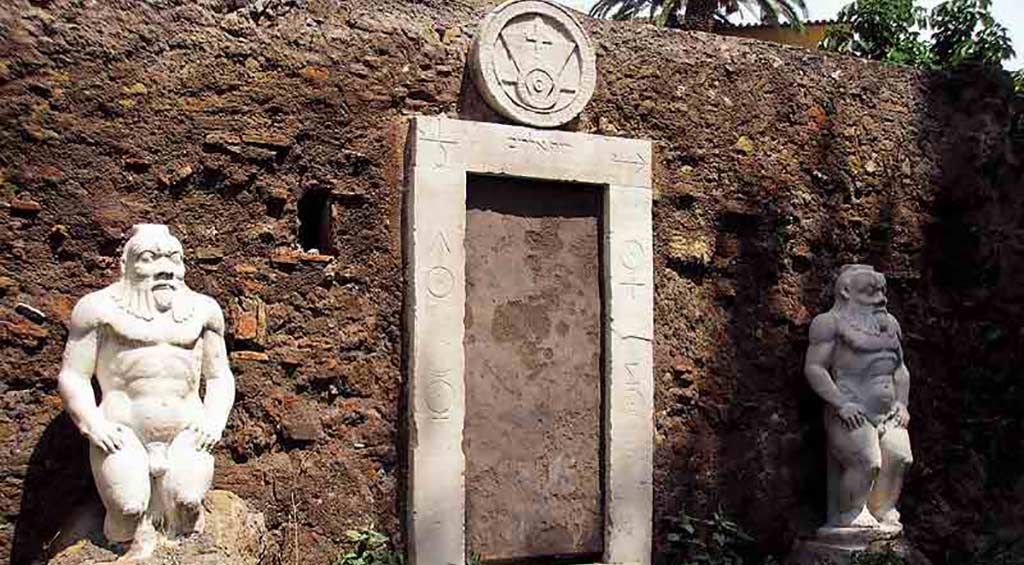 After Regoli’s maritozzi, here’s a mystery to uncover near the Monti neighbourhood. While you walk off one of Regoli’s maritozzi, your mouth still tasting the whipped cream, go to-ward Piazza Vittorio. In a corner, now fenced off, you’ll see a strange threshold, flanked by two grotesque figures. It’s situated opposite the so-called Trophies of Mario, the remains of Alessandro Severo’s sacred temple. What could this strange portal with esoteric symbols in the Esquilino neighbourhood be?

The Alchemy Gate in the old Villa Palombara in Piazza Vittorio

You’re standing in front of one of the mysteries of Rome near the Monti neighbourhood: the Alchemy Gate (or Magic Portal) of Villa Palombara.

This portal was originally situated in what used to be Villa Palombara, at the intersection of Via Merulana and Via San Felice. The Villa was razed to the ground in 1883, after Rome was an-nounced capital, to leave space for the Esquilino neighbourhood. The only thing left is this Al-chemy Gate, one of five that were all destroyed, and an authentic example of occultism near the Monti neighbourhood, dated back to the 1600s.

Rosicrucians and alchemy: esotericism near the Monti neighbourhood

Specifically, the Gate was an entrance to the villa, build in the XV century by the will of the Mar-quis Pietraforte Massimiliano Palombara, a convinced Rosicrucian. The Rosicrucians were a secret sect, and we know little of their true intentions and goals. The Marquis supported economi-cally many intellectuals and academics of his age, and they often met in his home, in the end-less search for the philosopher’s stone, which was said to turn matter into gold and give anyone the gift of eternal knowledge and life.

The members of the esoteric circle of Villa Palombara

The Marquis of Palombara had surrounded himself with people, creating a true esoteric circle. They performed alchemic experiments inside the villa, and they entered through the door you’re standing right in front of. Part of this circle were:

* the Queen of Sweden, Cristina, who’d abdicated after her conversion to Catholicism and had moved to Rome;

* Giuseppe Francesco Borri, ex-jesuit ousted by the order for his interest in occultism;

* the Reverend Athanasius Kircher, scientist, inventor, renowned researcher, knowledgeable in many fields such as mathematics, astronomy, ethnography, anthropology, medicine and so much more;

* Domenico Cassini, also mathematician, biologist and most importantly astronomer, known for the discovery of many planets and satellites of our solar system;

These were probably annotations made by Francesco Borri, who was forced to suddenly leave Villa Palombara, because he was being sought by the Inquisition, as suggested by these sym-bols and mysterious inscriptions. Each lateral symbol is associated with a planet, a metal and a latin inscription, through which one could understand important alchemical processes and esoteric information. In the upper part of the frame is the Jewish inscription “Divine Spirit” and a reference to Jason and the Golden Fleece. These and many other often incomprehensible engravings can be found here, like the Star of David. The two statues on each side came from the Egyptian Pan-theon: they represent the god Bes, protector of homes, but were relocated here only after the 1800s.

The Monti neighbourhood: Mysteries and Maritozzi

There’s still a lot to say about this mystical Alchemy Gate, about the controversial characters of Villa Palombara, and about the esoteric practices of a Baroque Rome. In the meantime, while you get lost in the mysteries of the Magic Portal, you might get hungry, and you’ll want to return to the Pasticceria Regoli for another maritozzo.

If you want to dive into Rome’s secrets near the Monti neighbourhood and see the Alchemy Gate of Villa Palombara with a nice maritozzo in your hand, book the holiday home San Martino View at Monti.